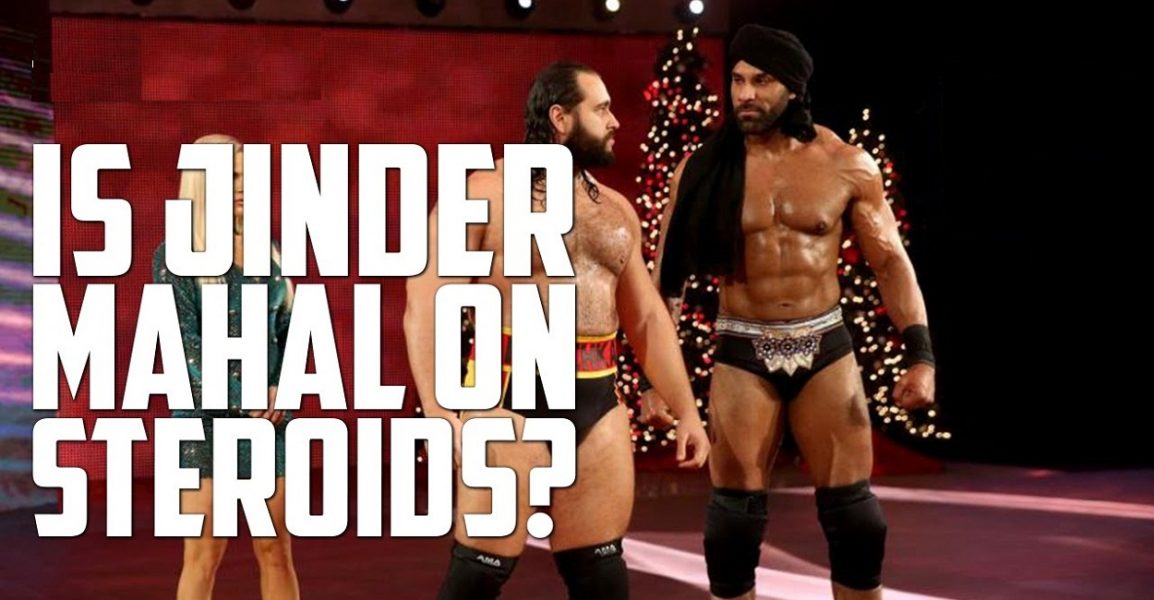 Today we are discussing Jinder Mahal Steroids use, and uncover the facts and proofs to find either he is natty or juice.

where he performs on the SmackDown brand under the ring name Jinder Mahal.

Mahal joined WWE in 2011, making his debut on the company’s main roster after competing several years in the independent circuit.

His first storyline is with “THE GREAT KHALI” as his brother-in-law after that joined 3MB. Jinder Mahal was released from the company in June 2014.

He was signed again by the company just after 2 years of his release with the dramatic change in his physical appearance.

That is why he was pushed to be on top and main event many pay-per-views and now became the WWE champion.

This before and after picture shows the transformation of Jinder Mahal in these two years of his release from WWE.

There are a lot of accusations on Jinder Mahal steroids use is spreading the internet nowadays.

These accusations are not by fans and viewers only but some are also from professional bodybuilders and former WWE wrestlers.

Professionals on Jinder Mahal Steroids Use

Take a look at this video in which Nick Miller( Natural Body Builder) who offers tips and information on professional bodybuilding, gives some ideas on Jinder mahal’s transformation and he should go for a steroid test or not???

In this video, nick highlighted signs that show Jinder Mahal could be using steroids.

We all know these can be achieve by a strict workout routine and diet. That is why nick believes Jinder Mahal should go for a steroid test.

You can go through the internet or Jinder Mahal’s Facebook or Instagram where he posted some of his pictures.

You will notice excessive vascularity, all over his chest, arms, and legs which is the most common sign of steroid use.

As it is also possible without steroids but only for some skinny guys but when we are talking about Jinder Mahal it sounds fishy….

Well, low body fat is not a sign of steroid use it can be achieved with a strict workout routine.

As a professional wrestler, he has to cut down his fat but the question is if it was easy every wrestler would be as ripped as jinder mahal.

He is a professional wrestler and starts his career back in 2010 in the independent circuit. From 2011 when he was signed on the main roaster and till his release in 2014, he looks just another wrestler who eats go to the gym and performing in the ring.

But suddenly when he came back to wrestling again in the time of two years he builds massive muscle and gets ripped at the same time.

That transformation leads him to the main event.

And this type of transformation makes him suspicious of steroid use.

Such a massive gain only can be achieved by using steroids or you have to be a genetic freak.

In every picture of Jinder Mahal, we noticed gyno, which can be caused by hormonal imbalance or elevated estrogen levels and testosterone levels.

Gynecomastia can be caused by methadone and other steroid cycles.

Whereas some professional wrestler also wants an answer too.

According to former WWE wrestler, Ryback gyno in Jinder Mahal is the result of anabolic steroids.

He claims that it is pretty obvious that Jinder Mahal is on steroids, Ryback recently says that “ The Secret is in his tits”

Ryback also acknowledges that Jinder Mahal is looking great now but gyno proves his steroid use, and it’s not a thing that just happens with protein shakes.

Jinder Mahal always denied that he used steroids in this transformation period well he also add that WWE has a very strict drug policy.

But if Jinder Mahal was on steroids he never is on roaster anymore.

After Ryback attacks him by saying he is on anabolic steroids.

Jinder Mahal was interviewed by Sportskeeda, and asked him about his “stark physical transformation.” he replied:

“The secret is consistency. I literally haven’t Cheat a meal in the last 3-4 months or so. I have never eaten anything that I shouldn’t have. Even now, on the roads with WWE, I have my meal bag with me and I carry 5 meals with me so that I eat it after every 2 hours. In every meal, I am also bound to take 30/40 grams of carbohydrates and 30/40 grams of proteins.

I also became straight edge I have cardio 6 days cardio sessions a week accompanied with and weight training.

And there are lots of other basic exercises like squats, lots of push-ups and many more. After all this I put to myself I am seeing good results and will continue to be better not because I only look good and I am in good shape it because I feel good and wants to feel better every day.

In terms of stamina and endurance, I am feeling much better and it is very important as a wrestler to be physically fit and have massive stamina because we had to fight long matches every night.

It’s pretty hard to say but it feels Jinder Mahal could be on steroids.

Because his massive results can’t be achieved by just a diet as he mentions in his interview.

You can order crazy bulks products directly from the official website here with free shipping.