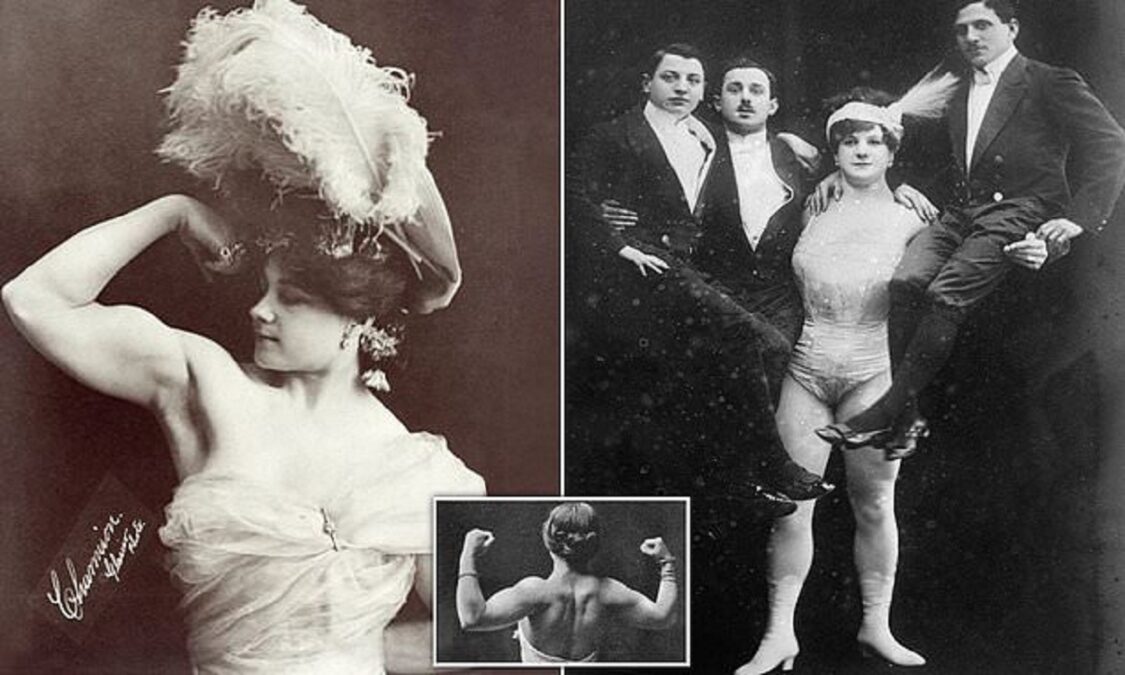 Female bodybuilding today is a competitive sport, but back in the 1800s women who lifted weights were called “strong women”.

When women think of bodybuilding they think of strong bulky muscles, but if they only knew the benefits that bodybuilding can offer women.

It is an incredible way for them to improve their physique, and believe me a firm and tight body is more enticing than a skinny woman with very little muscle.

While you may think that female bodybuilding is a recent concept it is not, maybe it was not looked at as bodybuilding a century ago.

But in the late 1800s, there were many famous strong women that paved the way for today’s female bodybuilders.

Most of these women were way ahead of their time, and in most cases were considered slightly freakish because of their strength and their robust physiques.

But all the same, they are still known today and will remain historical figures in the world of bodybuilding.

One of the first and most notorious strong women was a woman by the name of Josephine Blatt, born in 1869 she passed away in 1923.

She was a famous performer known as “Minerva”, for many years she carried the title in the Guinness Book of World Records as having lifted the greatest amount of weight of any woman.

Josephine Blatt was also known to break horseshoes with her bare hands, break steel chains by expanding her chest and play catch with a 24lb cannonball.

In the July 1937 issue of Strength & Health magazine, Rosetta Hoffman made a claim that Minerva had lifted 23 men.

But later that figure was found to be slightly exaggerated and the actual count was 19 men but still was an incredible feat.

Laverie Vallee was also known as “Charmion” was not only a strong woman she was also a famous Vaudeville trapeze artist.

Charmion had an act that combined both her strength and trapezius skills.

Her act consisted of coming out in a Victorian outfit and mount the trapeze stripping her clothes until the only thing on was a leotard which turned many heads.

And the men obviously love the show, in fact, Thomas Eddison was a huge fan, in fact.

He was so much a fan he asked her to star in his movie performing a trapeze disrobing act.

Kate Roberts also was known by the name “Vulcana”.

Where they immediately fell in love, the only problem was that Rober had a wife and kids which forced them both to run away together.

Some of Vulcana’s authenticated feats of strength included a bent press with her right hand, where she lifted at least 124 ½ lbs (56.5 Kg).

She also performed an overhead press with 56lbs of weight in each hand.

She earned hundreds of medals through her career, including a medal from the father of French bodybuilding Profesor Edmond Desbonet and her picture on the cover of La Santé par Les Sports.

In the early 1900s, she performed in many different music halls throughout England by demonstrating her exceptional strength by lifting and carrying weights and people.

She became famous for her strength she worked for Ringling Brothers and Barnum and Bailey circus for many years until her 60’s.

When she was younger she was known for defeating famous strongman Eugene Sandow in a weightlifting competition.

Katie lifted 300 lbs over her head which Sandow only managed to lift the weight up to his chest.

That victory was what gave her the stage name “Sandwina” the female derivative of Sandow.

One of Sandwinas performances was lifting her 165 lb husband with one arm over her head.

Her record stood for several years, her record was later surpassed by female weightlifter Karyn Marshall in 1897.

Abby Stockton could be the pioneer of female bodybuilders Born on August 11th, 1917 in Santa Monica, California.

She started lifting dumbbells and then moved on to calisthenics adding in some gymnastics into her training routine after reading the book “ physical culture” by Bernarr Macfadden.

Abbye transformed her body into a phenomenal and attractive specimen.

She became so famous that she and her husband Les Stockton put on shows in the 1940s at the famous Muscle Beach in Santa Monica California.

Abbye passed away in 2006 but in 2000 the IFBB federation inducted her into their bodybuilding hall of fame.

A gorgeous 5ft 7in tall woman who wore spectacular costumes was also called the ” Strong Lady of Variety”.

During a 15 minute act, she would bend bars of steel, rip copies of  1000 page London phone book and break 6-inch nails.

At the age of 15, she could lift a baby elephant.

Joan Rhodes was also well known for her appearance on the TV show the toast of the town.

She also toured with Bob Hope Christmas shows and entertaining the troops for the USO.

As you can see strong women have paved the way for modern-day female bodybuilders and their struggles were probably more difficult back then.

Now with modern machines and Female Bodybuilding supplements, there is no reason why any woman cannot build the perfect body along with incredible strength.